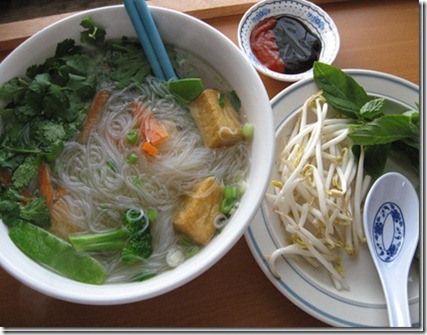 I'm jumping into the stove-top travel project E.A.T. World with a trip to Vietnam, for a steaming bowl of pho.  If Vietnam has a national soup, this would be it.  Pho typically features beef broth and fish sauce, but a rich broth of ginger, onions, star anise, cloves, and vegan "beef" broth powder (with a few more additions) packs more than enough great flavor.

A quick side note on the E.A.T. World format - I know I'm not sufficiently organized to do this alphabetically, so I'm using a random approach.  Thus, starting with "V."  My goal is to cover the alphabet in the next few months...at least I say that now :)

I've had pho (pronounced "fuh," by the way...you probably knew that, but I've said "fo" more than once), but never made it at home, so I scanned a few relevant cookbooks for ideas.  My main source is Pleasures of the Vietnamese Table, by Mai Pham, another good library find.  Mark Bittman's How to Cook Everything Vegetarian has a nice faux pho recipe too.   I'm used to soup being an easy and improvisational affair, but pho is nothing to mess around with.  The key is the broth, so let's begin at the beginning.

Making Pho Broth
Pham's recipe for pho calls for toasting or charring the ginger, onions, and spices before adding to the soup broth.  This makes sense, because roasting vegetables always brings out flavor that simple boiling does not.  I charred the ginger and yellow onion over my gas stove burner, and peeled away the charred parts before adding to the broth.  Here's the onion, which actually set off my smoke alarm. 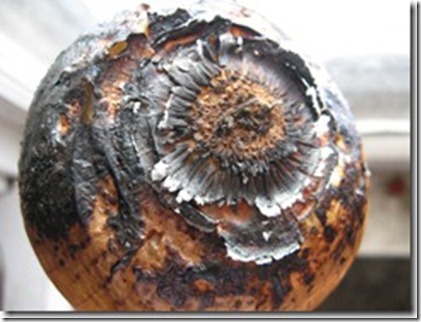 The star anise, whole cloves, and black peppercorns were dry-toasted in a fry pan for about two minutes, before adding to the ginger and onion broth.  Other broth ingredients include one crushed garlic clove, one tbsp. sugar, 1 tbsp. vegan beef broth powder, a pinch of kelp powder (a vegan nod to the fish sauce) and salt and tamari to taste.  I simmered the two quarts or so of broth for about an hour, and then let it sit.  The flavor developed nicely after the broth sat for a couple of hours, so if you make this I highly recommend making the broth well ahead of time, even the night before.  After the broth has cooled, pour it through something to strain out the ginger, onions, and spices. 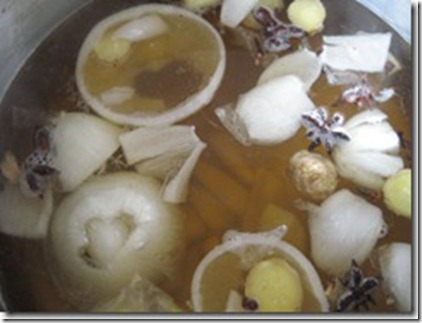 On we go to the soup ingredients.  Since pho can include so many great fresh veggies and herbs, it really was born to be vegan, if I may say so.  The trick of pho is to let the boiling hot broth cook the soup ingredients just before you begin eating.    To ensure that everything cooked fairly evenly, I used naturally thin veggies - snow peas - and thin sliced carrots and broccoli florets.  Deep-fried tofu cubes and cooked rice sticks provide the soup's bulk, with boiling hot broth poured over the tofu, noodles, and veggies.  My ingredients are assembled below - the chopped serrano peppers, scallions, bean sprouts, thai basil, and cilantro are added as garnishes, to your taste. 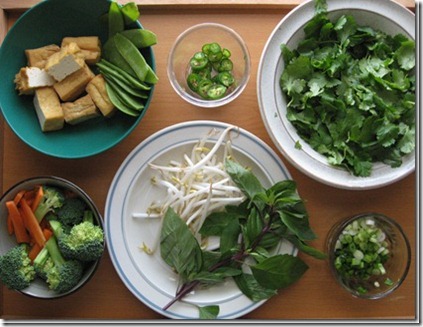 Here's a broccoli floret, a brilliant green after a few minutes in the broth.  The vegetables will still be pleasantly crisp, since they do their little bit of cooking in the soup bowl.  It may be a good idea to blanche the vegetables for a moment in boiling water right before assembling the soup, just to preserve the heat in the serving bowl. 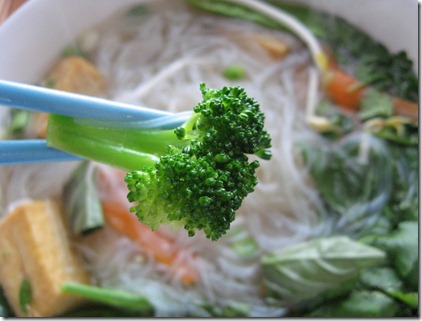 I almost forgot about the limes!  Fresh lime juice is sprinkled in along with the other garnishes, like these bean sprouts and thai basil.  I also made a little dipping bowl with hoisin sauce and hot pepper sauce (sriracha), since I've seen that done.  The sauce was great with the tofu and veggies, and can also be used to further season the pho.  Mai Pham frowns on that though, since she says it masks the subtle flavors of the pho broth.  She has a point, but hoisin shares the licorice flavor of star anise, so I think they go together well. 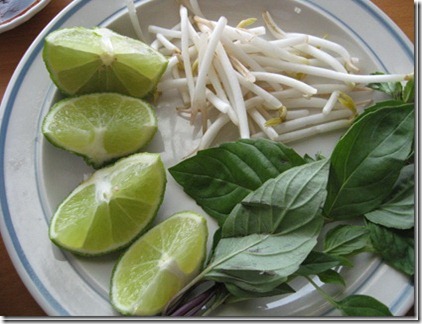 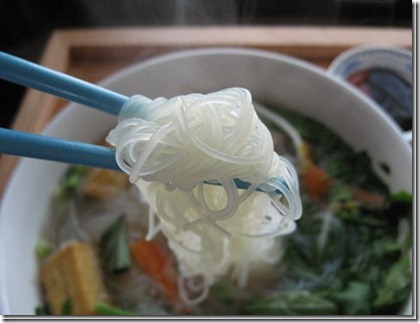 Pho requires more than a little special preparation, but it really is a treat.  It's also a good reason to break out the chopsticks, and pick up one of those cool soup spoons at any Asian market.  The rice sticks tend to bunch together into one long rice stick weave, so I recommend shamelessly slurping and shoveling with your chopsticks.  I think that adds to the fun.  One more tip:  use the biggest soup bowl you can find, since the more broth you use, the longer the soup stays nice and hot.  Any proper pho is a meal in itself, so don't be shy about that big bowl.

Way to kick off E.A.T world, Mike! All the photos are so beautiful! So enticing! So mouthwatering! Definitely shameless-slurp worthy! :-D

You are a hard core chef setting off your smoke alarm like that! Wow, that onion really got toasty, didn't it! Unfortunately I am no stranger to the smoke alarm, but for far less glamorous reasons - I burn my toast rather frequently.

I love this post, and I love how much you've taught us about Pho (I will never ever pronounce it "fo" again!) It doesn't seem so intimidating after you broke it down for us.

Your random entries will always keep us guessing what your next destination will be! My entries might get random after I hit "g". That's all I have planned so far.

Is it OK if I post one of your awesome photos and link back to your blog on my next E.A.T World entry?

Thanks River, and thanks again for a wonderful idea to keep us inspired about exploring new foods! Feel free to use any photo in your next post...I can't wait to see what you have in store. B has so many interesting options, so I'll be watching for your next stop on our global tour :)

Mmmm this soup looks great. I love to make soup from scratch, this one sounds fabuuu thank you!!

I'm a huge fan of pho, but have only made quickie versions of it. I can only imagine the complexity and deliciousness of yours. You've inspired me to try a more authentic version. Thank you.

v is my favourite letter!

i've never made vietnamese before, but i love it. it's always been one of those intimidating cuisines for me - in terms of making it myself. i think i just need to suck it up and give it a shot!

Hi Mike,
I'm Vietnamese and I'm a vegan. Your phở looks so yummy! I like the idea of fresh veggie ingredients (instead of using processed meat substitutes). I agree that using hoisin sauce is fine (the way you have it - on the side in a cute little bowl for dipping - is "correct," as opposed to pouring the sauce directly onto the broth). Vietnamese food is wonderful in that it's light, not too greasy. Keep up the good work! Vegan for the People, indeed. If you or your readers understand Vietnamese, come visit VietNamAnChay.blogspot.com (VietNamAnChay means Vegan Vietnam). Looking forward to your next adventure.
Peace & love,
TA

Amazing! Thank you for the tip on charring...I've made it before with star anise & cinnamon too, Pho rules.

Thanks, Mike! Wow...I could eat this soup Pho-ever haha.

You're welcome for the paneer recipe. It took a while to figure out the cheese making, but it was worth every minute.

This looks so good. I started with Mexico and plan to work my way through the alphabet as well. Like you, I am choosing a random letter.

Thank you for posting this! I LOVE pho, but there's nowhere to get it in my town. I can't wait to make this.

I had the first pho of my life a couple of weeks ago. There was a vegan and a non vegan version and the vegan version was made from regular vegetable broth. Thank you so much for explaining how to make real pho broth!

Oh my goodness! I am so very impressed with your prep. The pho looks absolutely amazing. I think I know a certain girl who is cooking some Vietnamese tonight!

This recipe was so tasty. I had to substitute some ingredients, for example using anise seeds for actual star anise-- couldn't find them at wholefoods!!-- but I think things turned out A-OK. I linked to this recipe on my blog (goveeblog.com)-- I hope you don't mind!

I think the obesity is very danger for everybody, is like a pump that can explot any time. So is necesary to take care exercising and taking good and healthy food and stop eating junk food.If you eat more vegetables or fruits will see a big difference in our life. The life is too short, so we need to take care of us every single day for enjoy the things that the life gave to us. I bought my house through costa rica homes for sale and i enjoy it every day.

London escorts directory London Crumpet is created to expose Independent escorts and escort agencies in London. Everybody can post their advert on this directory for FREE.

London Asian Escorts is an Asian and Oriental escort agency operating in Central London. The agency provides escort service for a true gentlemen.

looks delicious, but what are the exact quantities?! as in, how many cloves, etc.?

"The worst sin towards our fellow creatures is not to hate them, but to be indifferent to them: That's the essence of inhumanity."
- George Bernard Shaw

Mike K
I'm vegan (that means no meat, dairy, eggs, or other animal products) and love to cook, and I think vegan cooking blogs are a great way to answer people who ask vegans "what in the world do you eat?"

Some day I'm going to organize my links...