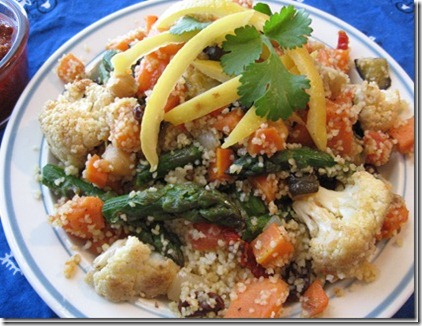 We're still in Africa for our third stop on the E.A.T. World tour, where the Atlas Mountains meet the sea, in Tunisia.  The sun is shining in a clear sky, the Mediterranean is a sparkling blue, and I'm on the beach.  North Dakota in January, with our ice storms and blizzards and Minnesota Vikings, are far, far away.  Life is good.

I didn't know much of anything about Tunisian food, besides those four words in the title: couscous, harissa, and preserved lemons.  That's a shame, but learning about food traditions is what makes E.A.T. World so much fun.  Tunisia, as a coastal nation with indigenous diversity and historical influences from Spain to Syria, has a stunningly diverse food heritage.  I began at the beginning, with a simple combo of roasted vegetables and couscous, as a base to experiment with the signature flavors of harissa and preserved lemons.

My veggie couscous contains a variety of roasted and stir-fried vegetables (cauliflower, sweet potato, carrots, zucchini, raisins, asparagus, eggplant, red bell pepper, chickpeas, onions, and garlic), seasoned with a little salt, pepper, cinnamon, and cumin.  Toss the veggies with prepared couscous, and you have a versatile and easy meal.  I used a ton of veggies because I roasted a bunch over the weekend.

Harissa is a hot chili sauce that seems to be mandatory in any Tunisian meal.  I looked at a half dozen or so recipes, and no two are the same.  I made this with dry pan-toasted caraway and coriander seeds and garlic cloves, along with chili powder, one fresh fire-roasted hot chili pepper, olive oil, and white wine vinegar. 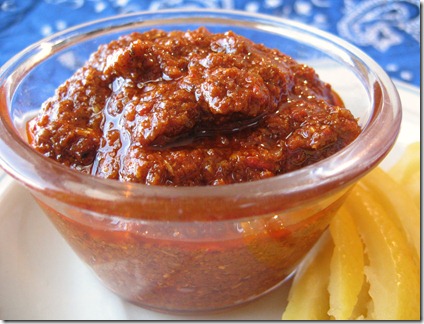 My harissa is mostly based on the recipe in Robin Robertson's Vegan Planet.  That's a great cookbook of international recipes, and also the name of Robin's blog.  Here's my minorly adjusted harissa recipe:

Dry toast the coriander and caraway seeds until they become fragrant - just a few minutes.  Dry toast the peeled garlic cloves as well, watching that they don't burn.  I did these in my cast iron pan, without any oil.  Because I had that mystery pepper around, I fire-roasted it on my gas stove, and peeled and seeded it after allowing it to cool down.  If you have a spice grinder, grind the whole spices, and mix with the ground chili and diced garlic and any fresh chilis, and the liquid ingredients.

For me, it was another chance to use the mortar and pestle - fast becoming my favorite kitchen gadgets.  Here's the final product, with a little water added to thin it out a bit. 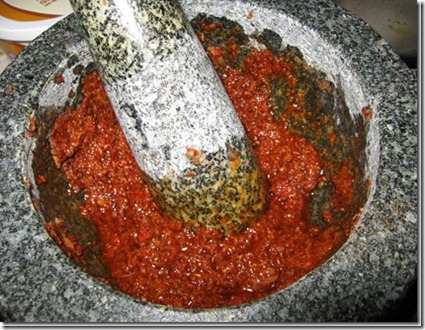 I introduced my preserved lemons in a previous post, and I'm trying them here for the first time, after letting them cure for nearly four weeks.  Upon opening the jar, I was pleasantly surprised!  They didn't go bad, which means the jar was sterilized well, and I managed to follow an extremely simple recipe.  Good for me, I guess :)

To make one quart of preserved lemons, I used two pounds of organic lemons (organic is important here, because you're eating the peels) and a half cup of sea salt.  After sterilizing the jar and lid in boiling water, fill the jar with alternating layers of quartered lemons (with the pulp and seeds still intact) and salt, and a few spices if you like - I used one cinnamon stick, 1star anise, 5 cardamom pods, 4 whole cloves, and a few whole black peppercorns.  After the lemon quarters are filled to within a half inch of the jar top, squeeze juice from the remaining lemons into the jar until all the lemon quarters are submerged.  Different recipes suggest letting the lemons cure for different periods of time, but three weeks seems about average.  After curing the lemons in the sealed jar at room temperature, the lemons keep in the refrigerator for months. 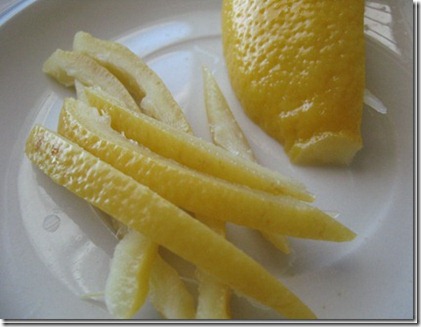 To use, scrape out the pulp and seeds, and rinse in water to remove some of the salt.  The flavor is - surprise! - salty and lemony.  Use the diced or sliced lemon peels to season North African stews or tagines or wherever else a dose of salt and citrus sounds like a good idea.  As with harissa, it makes sense to serve these as sides or relishes, so anyone can use them to their taste.

One final thought on harissa - I made much more than I could use with this couscous, so I have one thing on my mind: vegan harissa wings, which I remember seeing on someone's blog.  I like the idea of combining North Africa with sports bar food, though I won't be bringing them to any Superbowl party.  Thanks Vikings...though if Brett Favre is reading this, we'd love to have you back next year :)
Posted by Mike K at 6:02 PM

Mike I am loving the new ethnic angle of your blog. Seriously, I am learning so much from your blog in these last couple of months. I do not comment often but when ppl do hard work and stuff I think that they should be acknowledged. Beautiful presentation as usual.

Ok, maybe I can do this vegan thing for Veggieteen. Thanks for the inspiration, Mike

Mmmmmm...this looks delicious. I lvoe the harissa shot with the mortar and pestle.

I've never tried perserving my own lemons, but I just might have to give it a try.

Wow. This looks so good. I love any type of African food. I made a Jamaican dish this week.

You had me at the spicy Harissa!

I'm not really very familiar at all with any African cuisine, but this looks really good. It looks like a vibrant, healthy meal, and it is even quite pretty and colorful. Yum!

Another rockin' trip, Mike! Your trips are way more eco-friendly than mine. You are a very organized traveler, while here I am jumping from Europe to South America to the Caribbean and then Back to Europe.

Your Tunisian noms look wonderful! Again, using a mortar and pestle to prepare your spice blends and sauces is so hard core! Thank you for sharing the harissa recipe, it looks amazing - mystery pepper and all! The picture of the harissa with the glistening olive oil finding its way to the top looks soooo gooood! *heavy drooling*

You have much patience! After waiting for almost four weeks your lemons look absolutely perfect. I've never made any pickled or preserved anything. You get five million points for using your own preserved lemons! ;-)

Thank you for sharing your Tunisian adventures! Enjoy the beach and the vegan harissa wings. I hope Otter stays away from wobbly custards! :-D

wow, I had a little vacation myself with your opening paragraph! MO probably isn't as cold as ND, but we've had about 30 minutes of sunshine in 3 weeks and it is driving me nuts. I'm glad the preserved lemons worked out! I would love to have a batch at home but am intimidated by the whole sterilizing/preserving thing. Thanks for a great post!

Yum! I keep meaning to use a cauliflower- Tunisian sounds like a fun adventure! I'm loving your E.A.T. posts!

wow! i'm totally impressed by your world tour of food. i didn't know anything about tunisian cooking, so this was very interesting. who knew about preserved lemons!? i can't quite imagine what they taste like, but intrigued.
and that harissa looks really freaking good! i'm on the edge of my seat waiting for your vegan harissa wings experiment.:)

yum this looks awesome. i'm also loving the EAT world posts!! it's great to read about food I know nothing about!

Sounds delicious, man. I have a very good friend from Tunisia and he eats harissa on everything - I love the flavor. I also have a brand new mortar and pestle that I haven't even cured yet, so I am inspired by seeing you use it. Great blog, keep it up...

Roasted Veggie Couscous. I tried this recipe in my friend's house because his parents planned a special dinner when he graduated. It is very delicious and special indeed.

Hello! I've been coming through the blog and this is my first comment. I think you're doing a great job, specially with this Roasted Veggie. Seems very easy to prepare.

Nice to find this blog. Great information what you have shared with us. I appreciated you efforts very much. Good job! Keep posting...

Nice one. Keep it up.

Not all people are able to use beautiful words in life, there are some people who can translate the words of their mind into words, you are the only one of them, you have written this post in a beautiful way.
call girls in manesar
Bhiwadi Female Escort
call girls in sector 9
Female Escort Gurugram

Your awesome topic is yours. I like these topics very much. I would like to have such topics daily, this post is really good for you. There are people like you in the world who put their views in front of everyone. Thank you from the heart.

I have seen that every person wants to express their feelings but they are not able to express their feelings properly in words but the content you have written in your post is very beautiful, it seems that you have expressed your feelings Has expressed. Hi, you are a person who writes a very beautiful post, in the same way, you keep writing new posts in your life, our best wishes are with you
beautifull nightlife Gurugram
vip Girls In Manesar
time pass Girls Bhiwadi
Housewife In Gurugram
slim Girls Gurugram
Gurugram Girls Number

"The worst sin towards our fellow creatures is not to hate them, but to be indifferent to them: That's the essence of inhumanity."
- George Bernard Shaw

Mike K
I'm vegan (that means no meat, dairy, eggs, or other animal products) and love to cook, and I think vegan cooking blogs are a great way to answer people who ask vegans "what in the world do you eat?"

Some day I'm going to organize my links...